We hear the name ‘Bermuda Triangle’ and our first reaction is ‘Did someone get lost?” That’s the kind of mystery which circles around this place, that whoever has been there, gets literally lost, and that too under unexplained circumstances. Maybe it’s a coincidence, or maybe we’re making a havoc out of nothing, but the fact remains the Bermuda Triangle remains one of the most mysterious places on the Earth. How did it all come under the human radar though? And, how exactly did the The Bermuda Triangle get its name?

Let’s look through some of the most popular and mysterious disappearances, the theories behind these incidents and try to understand the facts and fiction behind the place. But, let’s understand where the Bermuda Triangle lies exactly.

The incidents around the Bermuda Triangle disappearances started way back in 1918 when the (then) largest vessel of the US Navy, The USS Cyclops disappeared mysteriously. It served as a collier during the WWI. The vessel was on its way from Bahia to Baltimore when it made an unscheduled stop at Barbados, after which it was lost without a trace. The ship’s wreckage was never found. 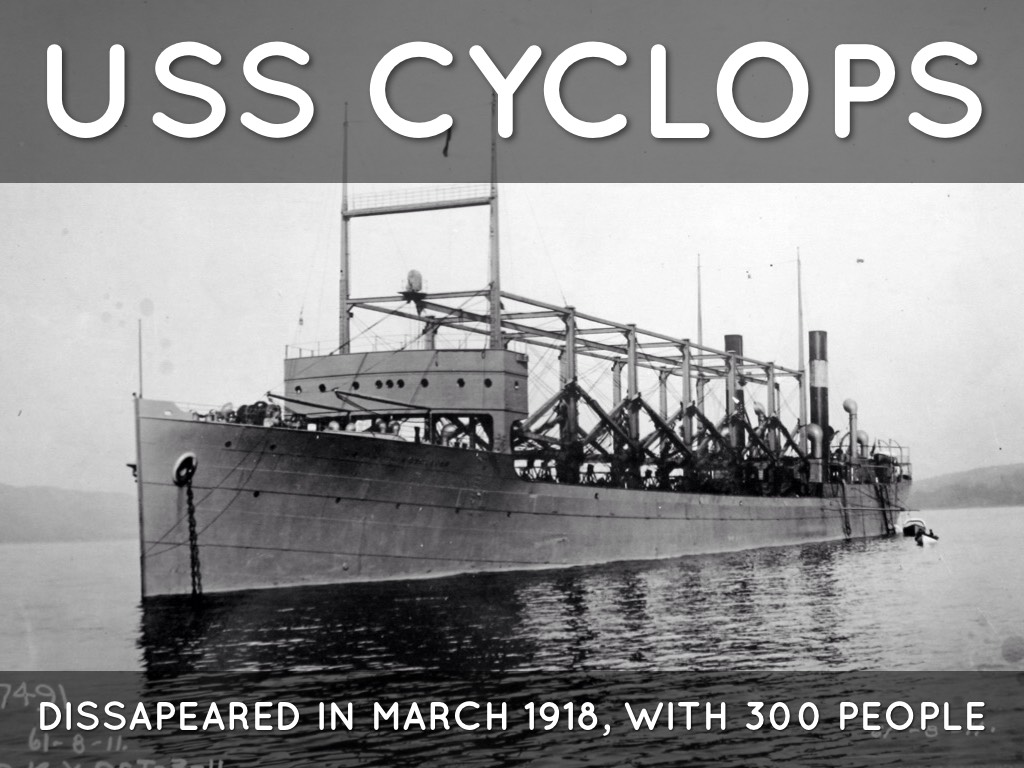 Probably the most popular and talked about incident, which brought Bermuda Triangle under the radar was the tale of Flight 19. On December 5th, 1945, Five Avenger torpedo bombers took off from the Naval Air Station at Fort Lauderdale, Florida, at 2:10 for a routine practice mission. Once the planned route was completed, the flight plan called for them to take a triangular path over the sea.

After about one and a half hour, the Commander, a Lt. Charles Taylor sent a radio transmission indicating his location (Florida Keys) and from snatches of the transmission it was evident that they were heading in the wrong direction. The communication was flailing and by the time their exact location was pinned, hope was already running thin. After the last transmission which was heard at 7:04 pm, rescue planes continued to search the area through the night and the next day but there was no sign of the avengers. In fact, one of Martin Mariners who was supposed to rendezvous the search zone, got lost itself and never showed, joining the 5 Avengers as ‘missing’. 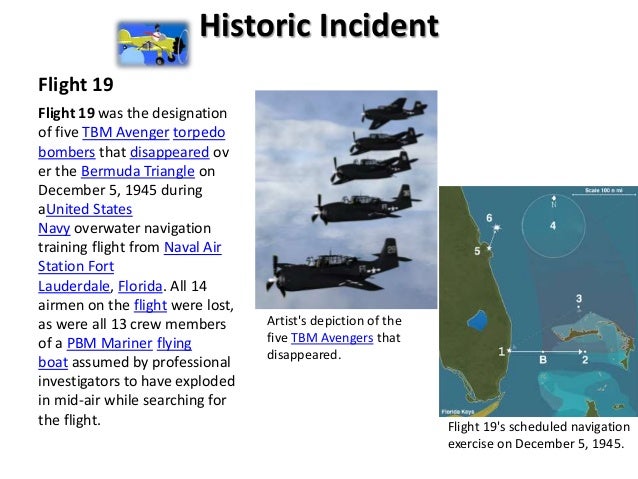 Another notable incident happened in 1963 when The SS Marine Sulphur Queen disappeared. The ship was carrying molten sulphur and is believed to have disappeared off the southern coast of Florida. Not unlike the previous disappearances, the crew of 39 on-board the ship and wreckage from the tanker was never found. 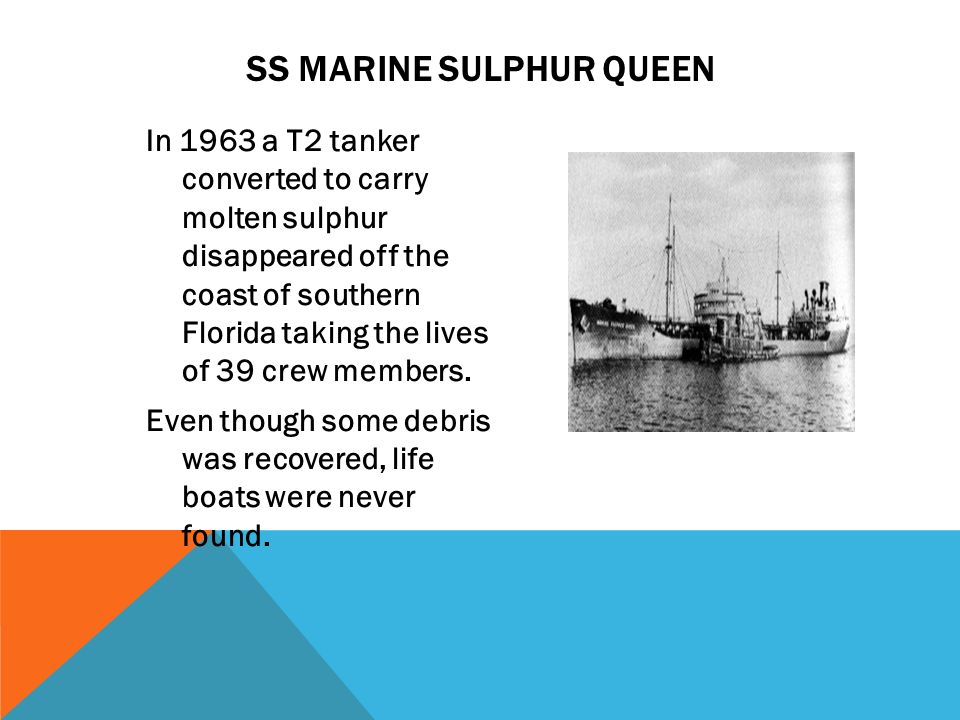 The Theories And Disapproval

The disappearances have been termed as mysterious mainly because of lack of evidence. Some believe that the accidents are the doings of sea monsters existing in the area while there are many who believe them to be caused by paranormal presence or the presence of aliens. 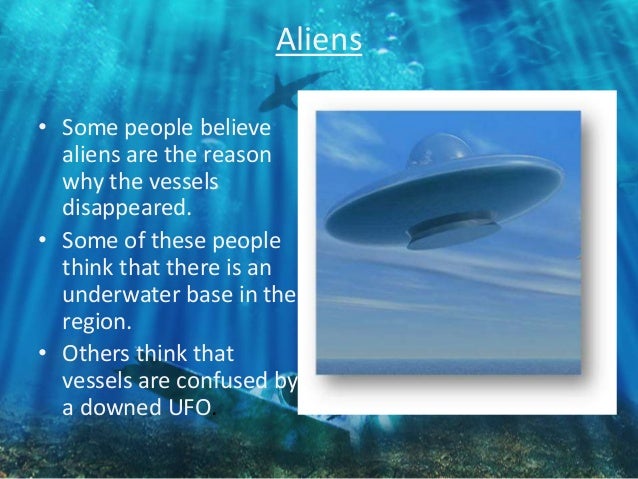 There is also a magnetic theory which says that the compasses begin to spin because of high magnetic energy in the region which confuses the navigators and hence they get lost.

Another theory claims that Bermuda Triangle is located over a gas trench which releases gas and lowers the density of water, leading to boats and ships not being able to float and thus sinking.

The lack of evidence and the fact that there was no distress called received from the USS Cyclops disappearance in 1918, led to people believing that there was indeed a paranormal force involved in the disappearance of the ship. However, there are two reasons as to why this could be untrue.

One is the fact that the incident could have happened anywhere between Barbados and Baltimore and not precisely at The Bermuda Triangle. And, secondly, we’re talking about the early 1900’s, so the wireless communications weren’t very reliable and it is quite possible that the USS Cyclops sunk so unexpectedly or quickly that there was no chance to send a successful distress call before the ship went under and sunk completely.

The disappearance of Flight 19, if we look at facts and not on theories, can easily be boiled down to navigational confusion of  Lt. Charles Taylor, who could not figure the exact location and hence radioed an inaccurate one. Poor communication signals, inaccurate location and bad weather seem to be the more likely reasons behind the crashing and disappearance of Flight 19 rather than demonic forces.

The speculations around this incident were further fueled when Taylor’s mother insisted that the report around the disaster to read “causes or reasons unknown” rather than it blaming her son. It was this which led to the coining of the word Bermuda Triangle by Vincent Gaddis in an article he wrote for Argosy magazine in 1964. The incident also inspired Stephen Spielberg to make the Sci-Fi classic Encounters of the Third Kind.

Coming to the third infamous incident of SS Marine Sulphur Queen, it has been repeatedly pointed out that many believers in the Bermuda Triangle theory overlook an obvious fact. The Coast Guard, following the incident, had openly stated that the vessel was already in a bad state and should never have set sail. Regular fire eruptions were a common thing and the ship’s structure was even more compromised because of change in its original mission as an oil tanker to carrying molten sulphur. The chances of it capsizing were pretty high and blaming its demise on the Bermuda Triangle seems foolhardy at the very least.

Another disapproval of said theories came in when in 1975, the editor of Fate said that the Bermuda Triangle was in fact just as dangerous as any other part of the ocean.The documented evidence indicates that many of these  “mysterious” incidents were actually reported inaccurately or embellished. The fact also remains unverified on whether these incidents occurred on the or outside the s Bermuda Triangle.

Whatever may be the case, the Bermuda Triangle remains to be the most talked about places on Earth. So, what’s your take on the mysterious and mysteries around the Bermuda Triangle? Do you think there is more to it? Tell us your view in the comments below!