Jamini Roy was a painter who earned fame and even accolades for himself in an era when art was not given as much respect as it is given today. So, how did Jamini Roy become one of the few handful painters to be remembered from the bygone era?  He was born in 1887 in West Bengal and joined the Government School of Art, Kolkata in 1903. Initially, he began with the Post-Impressionist genre of landscapes and portraits, his experimental side soon kicked in into his artistic nature and he made a complete switch to indigenous materials.

Jamini Roy began to paint on woven mats, cloth and wood coated with lime. He did so because he wanted to stop using European paints and canvases and replace them with suitable Indian alternatives. His inspiration for folk paintings came from the popular bazaar paintings which were then sold outside the Kalighat temple in Kolkata. It was this realm of Jamini Roy into Bengali Folk paintings and his refusal to use European painting materials, which marked a new beginning in the Indian modern art history. Jamini Roy’s USP was his love towards Indian roots. 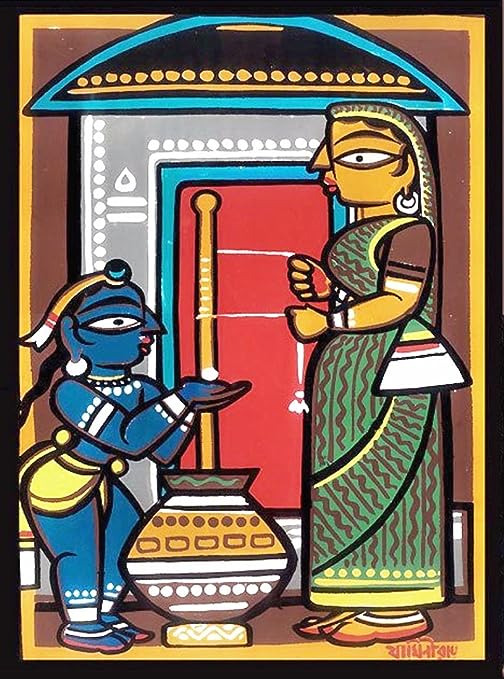 Such was his passion for Indian folk art that he never sought out to sell his works for fancy prices. In case he found out that the buyer was not taking good care of his paintings, he would buy back his own works. Even today, walking into an art-loving household of West Bengal is filled with a huge probability of coming across a well-preserved portrait of Jamini Roy. His most notable works include Ramayana, Dual Cats with one Crayfish, Bride and two Companions, Krishna and Balarama, Krishna and Radha Series and St. Ann and the Blessed Virgin.

His first recognition came in 1938, when his artworks became the first Indian paintings to be displayed at a British-ruled street in Calcutta. In following years, his works were exhibited at several prestigious shows at a global level. His most prominent awards include the Viceroy’s Gold Medal and the Padma Bhushan which he won in 1934 and 1954 respectively.

His personal life remained shadowed apart from the knowledge that he fathered four sons and a daughter. Jaimini Roy passed away a few days after his 85th birthday on April 24, 1972. Are you a fan of Jamini Roy? Do you own any of his paintings or know any interesting trivia about his works? Let us know in the comments.
(originally written for TopYaps.com)